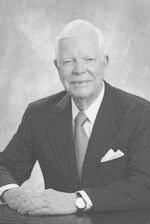 Doyle Rogers was a shareholder who joined the Firm in 1954 after his service in the United States Army. He passed away in 2016 after over 60 years with the Firm.